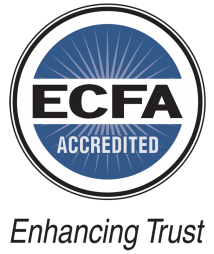 EGM adheres to ECFA Standards and recognizes accountability to God is vital, but some individuals form their impressions of both people and organizations by looking at outward appearances (1 Samuel 16:7). The Standards, drawn from scripture, are fundamental to operating with integrity. The ECFA Standards are seldom changed, providing members a steady baseline for consistent application of the Standards. The brief statements included in the Standards have significant implications; the Standards are simple, but not simplistic. These are not Standards that allow for grading on the curve. Rather. they are pass-fail Standards. If a member fails even one of the Standards, it is disqualified from ECFA membership.

The basis for establishing ECFA and developing Seven Standards of Responsible Stewardship™, is stated clearly by the Apostle Paul, “For we are taking pains to do what is right, not only in the eyes of the Lord, but also in the eyes of men.” 2 Corinthians 8:21 (NIV)

Or, as the New American Standard puts it, in verses 20 and 21, “Taking precaution that no one should discredit us in our administration of this generous gift, for we have regard for what is honorable, not only in the sight of the Lord, but also in the sight of men.” 2 Corinthians 8:20-21 (NAS)